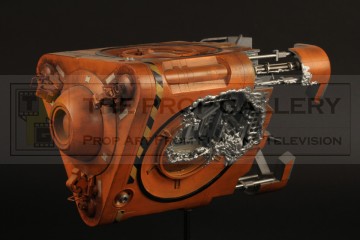 This escape pod filming miniature was used on screen in the series VIII episode Only the Good... carrying survivor Talia Garrett from the SS Hermes to Red Dwarf along with the microbe which subsequently destroys the pod. The miniature was designed and built by noted model maker Bill Pearson at Shepperton Studios and is the only one made for production. Constructed from EMA plastic the triangular shaped pod has differing side panels including a normal and damaged side as the craft had to appear complete and then partially dissolved by the microbe, the model was then shot from the two differing sides with the takes dissolved in to each other to achieve the effect we see on screen. The incredibly detailed miniature is dressed with kit parts, decals and detailing tape and is weathered to a dirtied down appearance. Some modifications to the model were made by Bill post production including the addition of a chair to the interior.

The model remains in excellent production used condition and has been mounted on a stand in a flying position. The display stands approximately 10" high with the craft itself measuring approximately 11" high and  7.5" each side. The underside of the stand has been signed by model maker Bill Pearson.