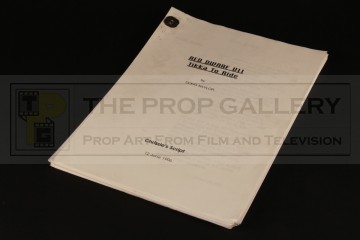 From Tikka to Ride, the memorable episode in which the crew use the time drive to go curry hunting and end up inadvertently preventing the assassination of American president John F. Kennedy this script is dated 12 June 1996 and comprises of 75 pin bound pages with a front cover featuring the name of the series and title of the episode. There are a limited number of annotations throughout the script, these hand inscribed in marker pen and relating to visual effects requirements.

The script remains in excellent condition with some light edge wear from handling and very minor soiling to the cover, generally fine.