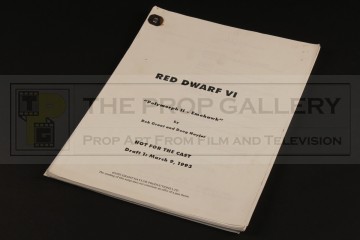 An original script used during the production of Red Dwarf, the BBC science fiction comedy series created by Rob Grant and Doug Naylor.

From the Series VI episode Emohawk: Polymorph II this original script is dated March 9, 1993 and comprises of 42 pages in addition to the front cover which features the title of the series and episode. The cover of this script also features 'NOT FOR THE CAST' to the bottom indicating that this script was only issued to crew members, in this case the BBC Visual Effects Department and it features a number of hand inscribed annotations throughout relating to special effects.