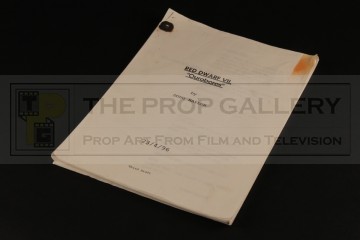 From the Series VII episode Ouroboros this original production used third draft script comprises of 55 pin bound pages with a front cover featuring the name of the series, episode and dated 23/04/96. This script was utilised by the BBC Visual Effects Department during the production and as such blocks of text relating to effects requirements have been highlighted in orange.

The script remains in excellent condition with some light edge wear from handling and very minor soiling to the cover, generally fine.