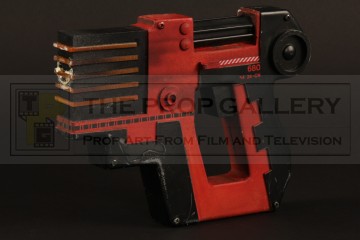 This gun was created for the Series VI episode Emohawk: Polymorph II and can be seen used by Arnold Rimmer (Chris Barrie) as the crew search the ship for the Emohawk which can disguise itself as various objects, Rimmer then places this gun in the waste disposal as he incorrectly believes it to be the creature.

This unique prop was scratch built by Mike Tucker of the BBC Visual Effects Department and is constructed from mixed materials including wood, plastic, resin and perspex detailed with various decals and a weathered paint finish in red and black. When the weapon is seen on screen it features a barrel which was simply added by one of the production crew as they felt it was lacking, in reality the weapon was designed in a futuristic style and was never intended to feature one and so it was removed and discarded after filming with the glue where it was temporarily attached still visible to the front of the prop.

This substantial and heavy weapon measures approximately 8.5" long and stands 6.5" high, it remains in excellent screen used condition with some minor paint wear.

A highly displayable and unique artefact from this cult science fiction series.