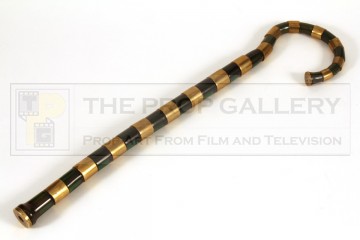 An original prop used in the production of The Ten Commandments, the 1956 religious epic directed by Cecil B. DeMille.

This is an original crook as seen used by Ian Keith as Rameses I and Yul Brynner as Rameses II, a significant symbol used in Ancient Egyptian society. The prop is custom fabricated with the staff constructed of brass covered with hand cut pieces of brass and both opaque and semi translucent Lucite which are intended to imitate gold and glass respectively, The bottom brass section is hand etched 'PARAMOUNT PICT CO, NO 3'. Many of the early publicity shots for the movie show Brynner wearing a duller green costume and holding this exact crook, these were later replaced by more striking blue costumes and a crook of blue Lucite likely at the request of DeMille who had a more colourful vision for the picture however each individually cut section on this crook is consistent with the one held by Brynner in the publicity shot presented here.

The crook measures approximately 17.5" long and remains in excellent vintage condition exhibiting only minor surface wear and a small chip to one of the Lucite pieces, overall very fine.

This represents a significant and highly displayable artefact from this highly regarded epic which stands among the most successful pictures in the history of cinema.