Ralph McQuarrie and the Power of God

Raiders of the Lost Ark is a 1981 action adventure film directed by Steven Spielberg and is the first instalment in the popular Indiana Jones franchise. Starring Harrison Ford with Karen Allen and Paul Freeman the movie follows archaeologist Indiana Jones in a bid to retrieve the Ark of the Covenant with competition from the Nazis who believe its powers will make their army invincible. The now iconic character was created by George Lucas many years before arriving on the big screen and was inspired by numerous old film serials of which Lucas was a fan. After the release of Star Wars in 1977 Lucas and fellow director Steven Spielberg were discussing future projects and the idea which became Raiders of the Lost Ark blossomed based on the character Indiana Smith who was named after a dog owned by Lucas. Spielberg's dislike of the Smith surname would ultimately lead to the birth of one of the most famous characters in movie history. Indiana Jones.

"The Bible speaks of the Ark levelling mountains and laying waste to entire regions. An army which carries the Ark before it......is invincible." - Marcus Brody

The central plot device of Raiders is the Ark of the Covenant, a biblical artifact which Indiana Jones must recover ahead of the Nazis who also seek the Ark believing it will make their army invincible. The design of the Ark hails from the Book of Exodus in the Old Testament where it is described in detail and various old religious texts where it had previously been depicted. Although the Ark is featured throughout the picture culminating in the climatic sequence where it is opened in a stunning visual effects sequence handled by Industrial Light & Magic the first time we see the Ark on screen is in print form as Indy discusses its powers with Marcus Brody, Colonel Musgrove and Major Eaton following the interception of a Nazi cable in which they learn of Hitler's plans. This introduction of the Ark required an illustration for the old bible which Indy uses to show what the Ark looks like, an important and establishing scene of the movie which required the creation of some dramatic artwork which would convey the power of the Ark, there was only one man for the job, Ralph McQuarrie. 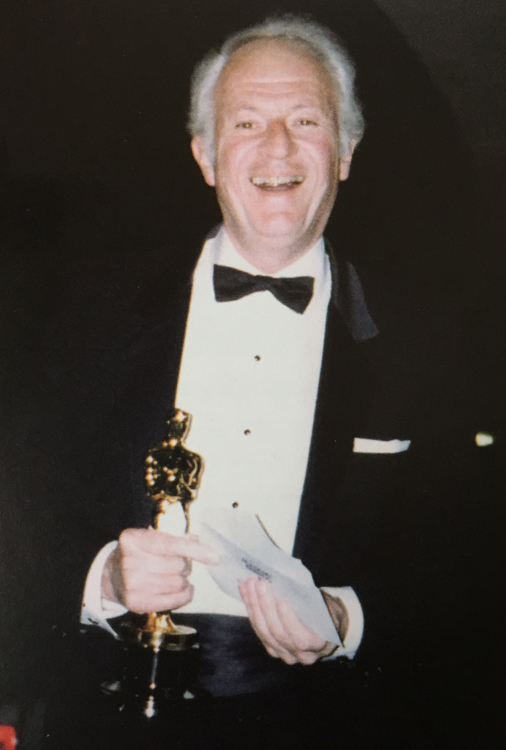 Ralph McQuarrie was by this time an old friend of George Lucas after they had collaborated together on Star Wars. McQuarrie served as conceptual artist and it was his work which helped Lucas convince Twentieth Century Fox to back the production, he was also extremely instrumental in defining the look of the franchise. Star Wars was released in 1977 to worldwide critical acclaim becoming the highest grossing picture of all time and bringing McQuarrie and his unique vision to the attention of other filmmakers. McQuarrie went on to produce important designs and illustrations for numerous pictures including Close Encounters of the Third Kind, E.T. the Extra Terrestrial and Cocoon for which he won an Academy Award for Best Visual Effects. He returned as a conceptual artist for the Star Wars sequels The Empire Strikes Back and Return of the Jedi and undoubtedly left an important mark on the motion picture industry. Ralph McQuarrie passed away on March 3, 2012 leaving behind an influential legacy and a body of work that few can match.

At the request of George Lucas McQuarrie began work on what would become the now iconic illustration which we see in Indy's bible. The process of bringing the initial idea to the big screen was longer and more complex than one may think, beginning with some rough concepts as McQuarrie fleshed out the idea before rendering a final illustration which depicts the Ark of the Covenant being carried in a biblical battle while emitting lightning, or the "Power of God", for this reason the work is often referred to with this title. 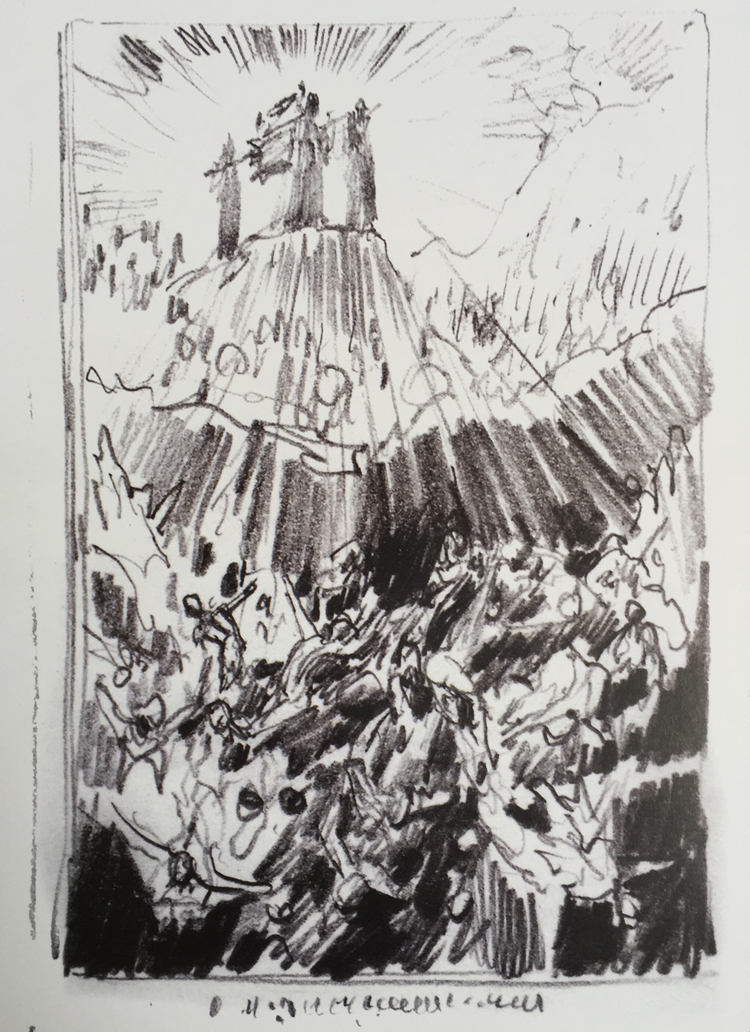 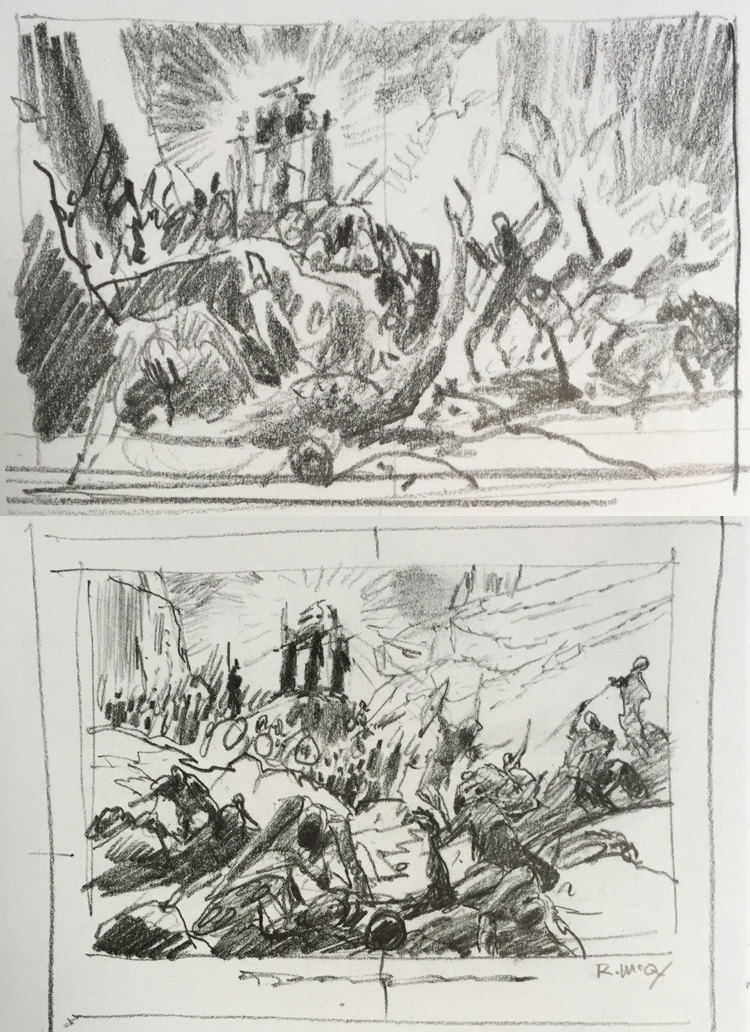 Above are some rough conceptual designs drawn by McQuarrie as he searched for the correct look for the illustration. These and the image of Ralph with his Academy Award are reproduced here with the kind permission of Dreams and Visions Press, publishers of The Art of Ralph McQuarrie: ARCHIVES in which they are featured. This excellent publication and others featuring Ralph's work can be purchased by visiting their website at http://dreamsandvisionspress.com/ 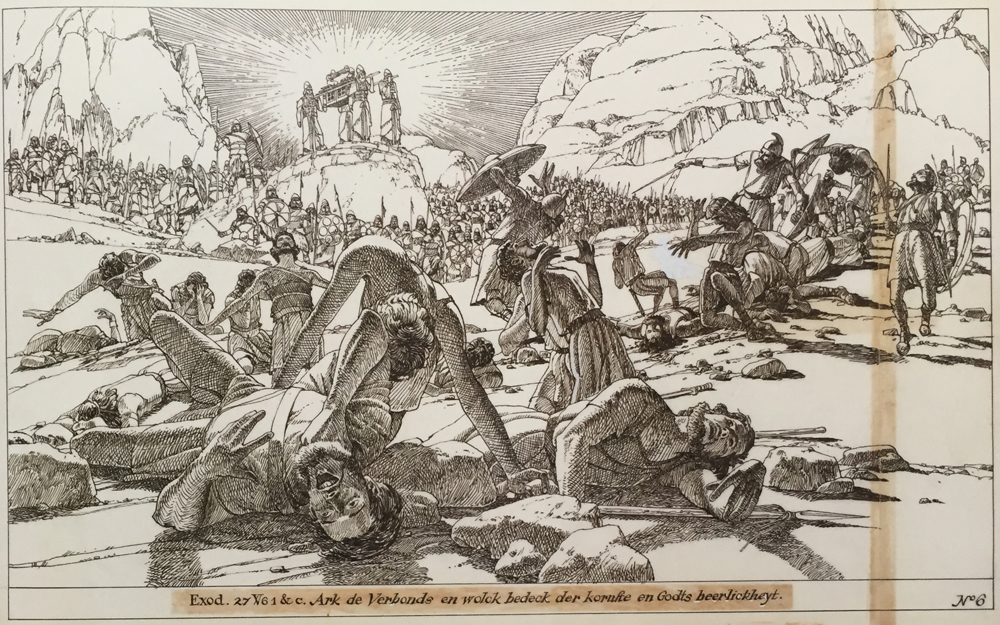 The finished artwork seen above is a highly detailed and dramatic piece which beautifully conveys the true power of the Ark, the characters we see in the foreground were inspired by photographs that McQuarrie took of his Industrial Light and Magic co workers while the text below appears to be a largely nonsensical biblical quotation. It is not McQuarrie's original ink rendering that we see on screen however, the bible page we see on screen was created using traditional printing techniques by etching a plate and using it to create a print of the illustration on paper.

The etching of the printing plate was executed by McQuarrie himself and is a skilled and time consuming process. Firstly a metal plate is prepared by covering it in a hot wax coating or ground which is then smoked to darken it. The artwork is then traced from the original rendering, rubbed with chalk and placed face down on to the printing plate thus flipping the design horizontally in the process. The design is then transferred to the plate by retracing over the drawing and delicately drawn in to the wax ground with an etching needle, the plate is then placed in an acid bath which eats away at the exposed parts thus etching the illustration on to the plate. After removing the remainder of the ground from the plate ink is rubbed in to the incisions in the plate which is then run through a press with sufficient pressure to print the illustration on to the page.

"They needed an antique looking image to match the look of an old Bible they had, showing the powers of the Ark of the Covenant. I did a couple of sketches for the design until I arrived at one that looked best on the page. I took photos of some of the guys at ILM to use as photo reference. I etched a plate and printed it on rice paper to match the paper in the Bible. I mounted the print I made in the Bible, which was colored with washes by someone else after the fact." - Ralph McQuarrie, The Art of Ralph McQuarrie 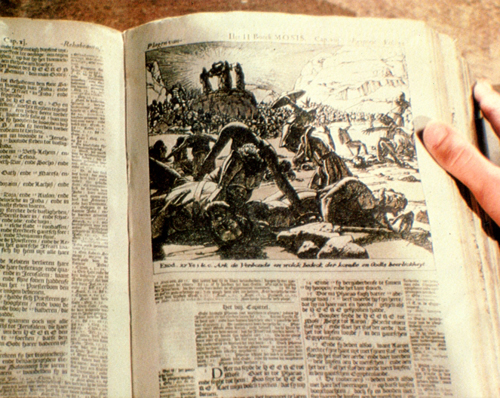 Shown below is the original plate etched by Ralph McQuarrie during production of Raiders of the Lost Ark and used by him to print the screen used Bible page illustration. It appears that at least two props were created to show the illustration, one being the Bible containing a cropped image of the illustration which can be seen featured on the Topps trading cards and in the read along audio book, this version of the prop is not seen on screen but rather a more detailed print which utilises McQuarrie's illustration in its entirety with an added coloured wash. A possible explanation for this is that the scene was filmed and it was decided that the shot did not emphasise or convey the power of the Ark of the Covenant sufficiently and so an improved prop was created and filmed as an insert shot, this theory is also consistent with the way the scene is cut in the movie and the fact that the book Indy places on the desk does not contain the image, this error is clearly visible on Blu-ray.

The "Power of God" was Ralph McQuarrie's sole contribution to Raiders of the Lost Ark and this represents a unique artefact and an incredibly rare example of an original artwork in the hand of McQuarrie himself, the piece remains one of his most iconic works and an instantly recognisable part of the Indiana Jones franchise. 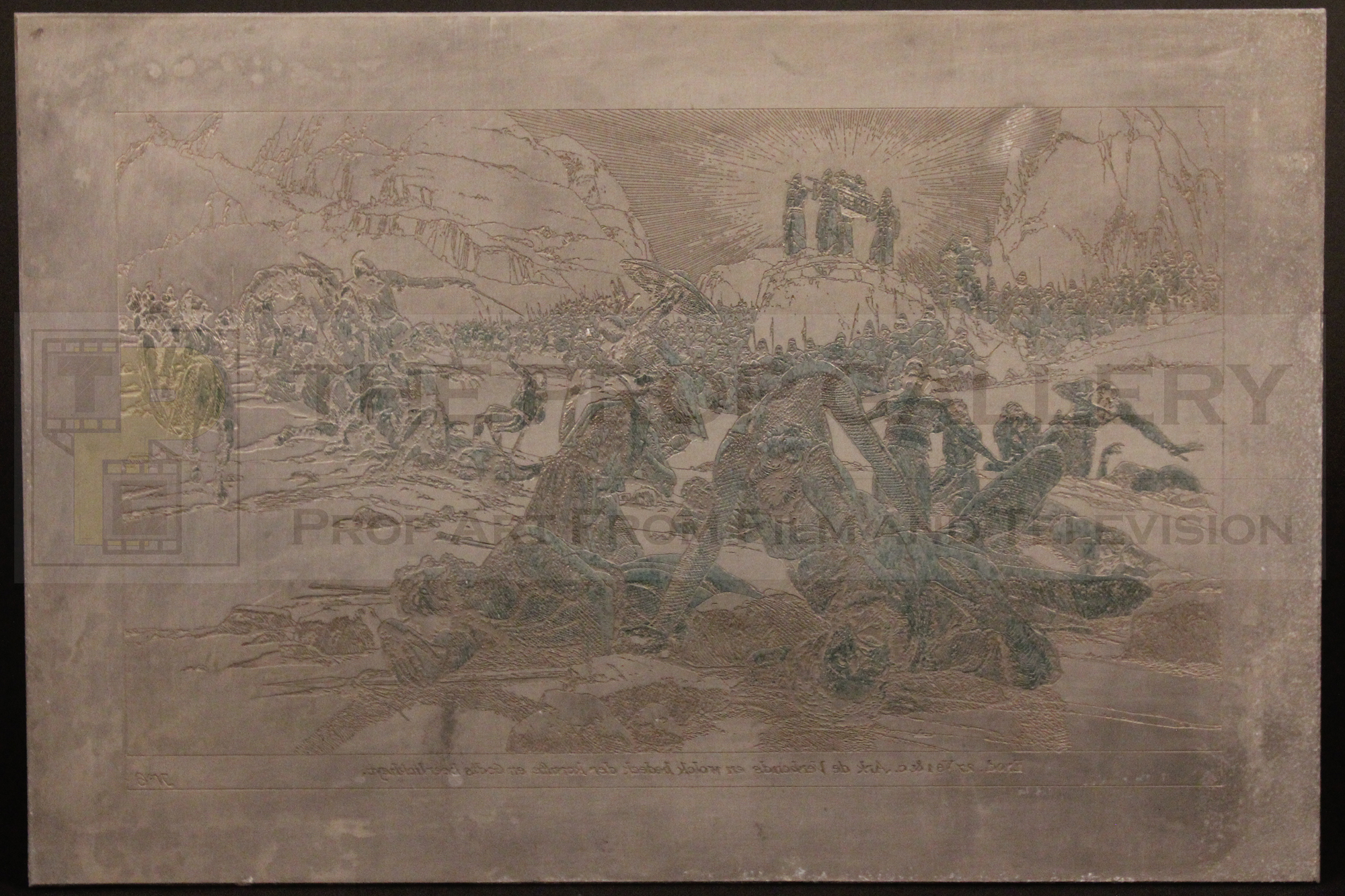 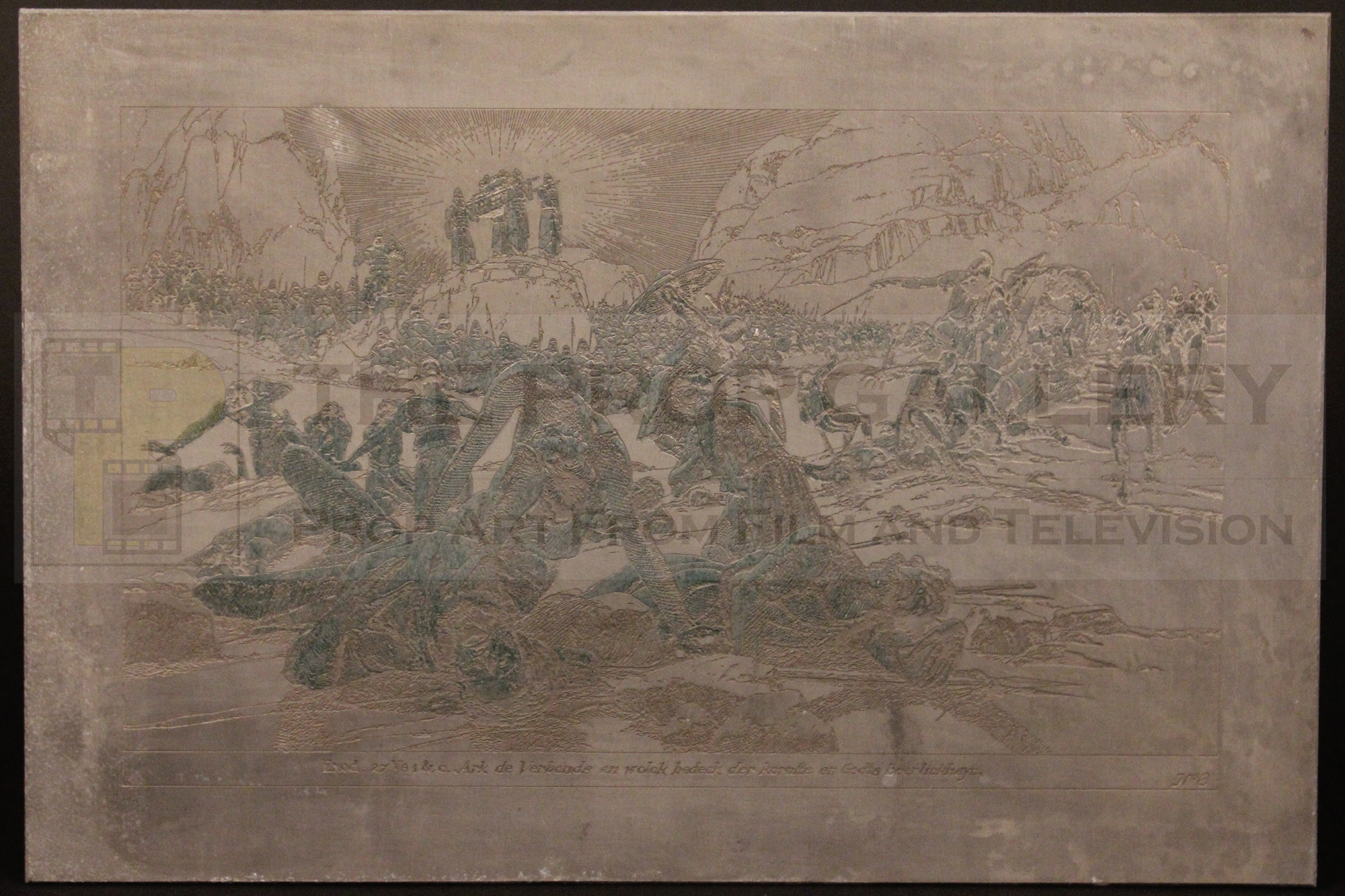 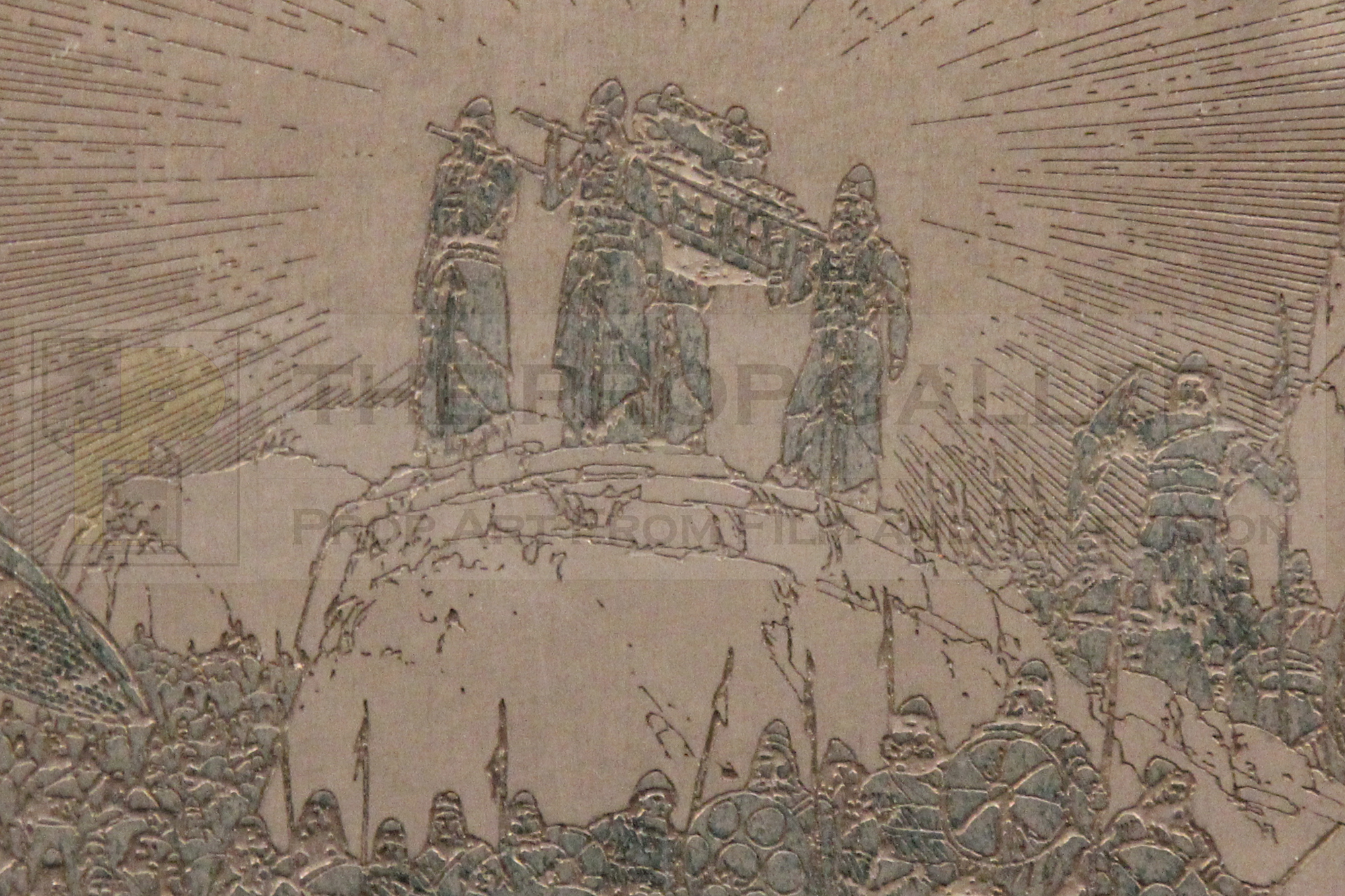 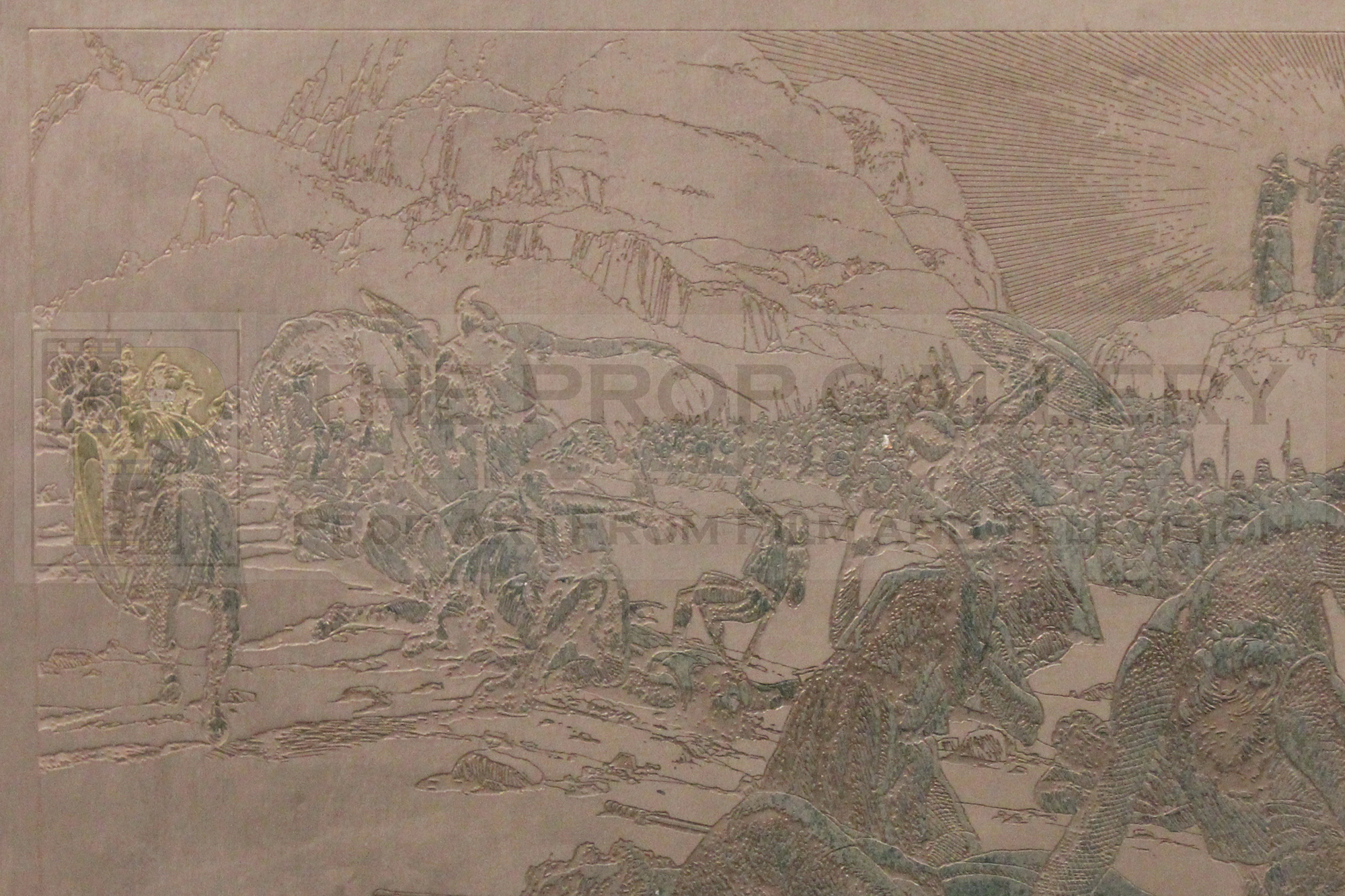 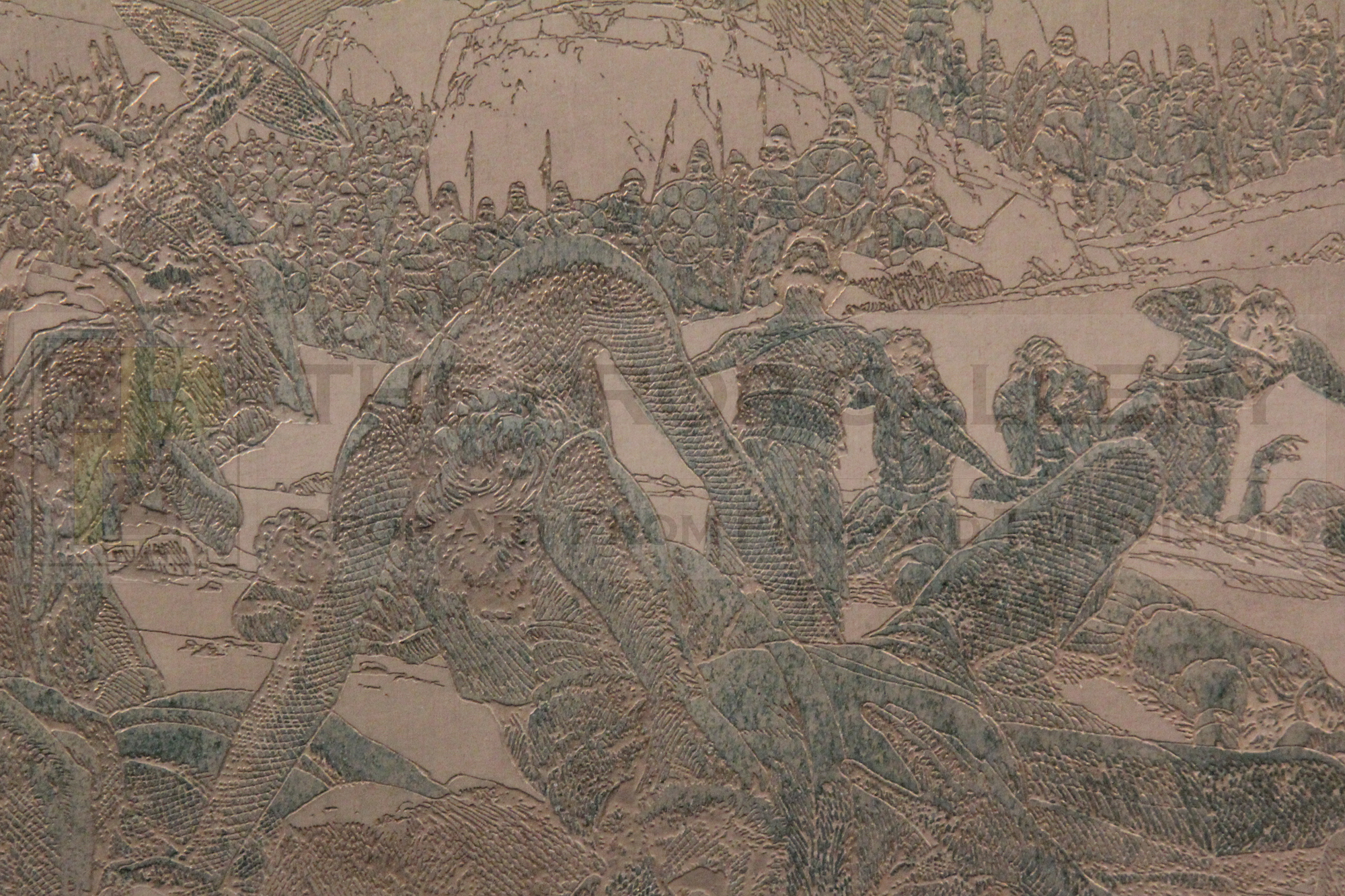 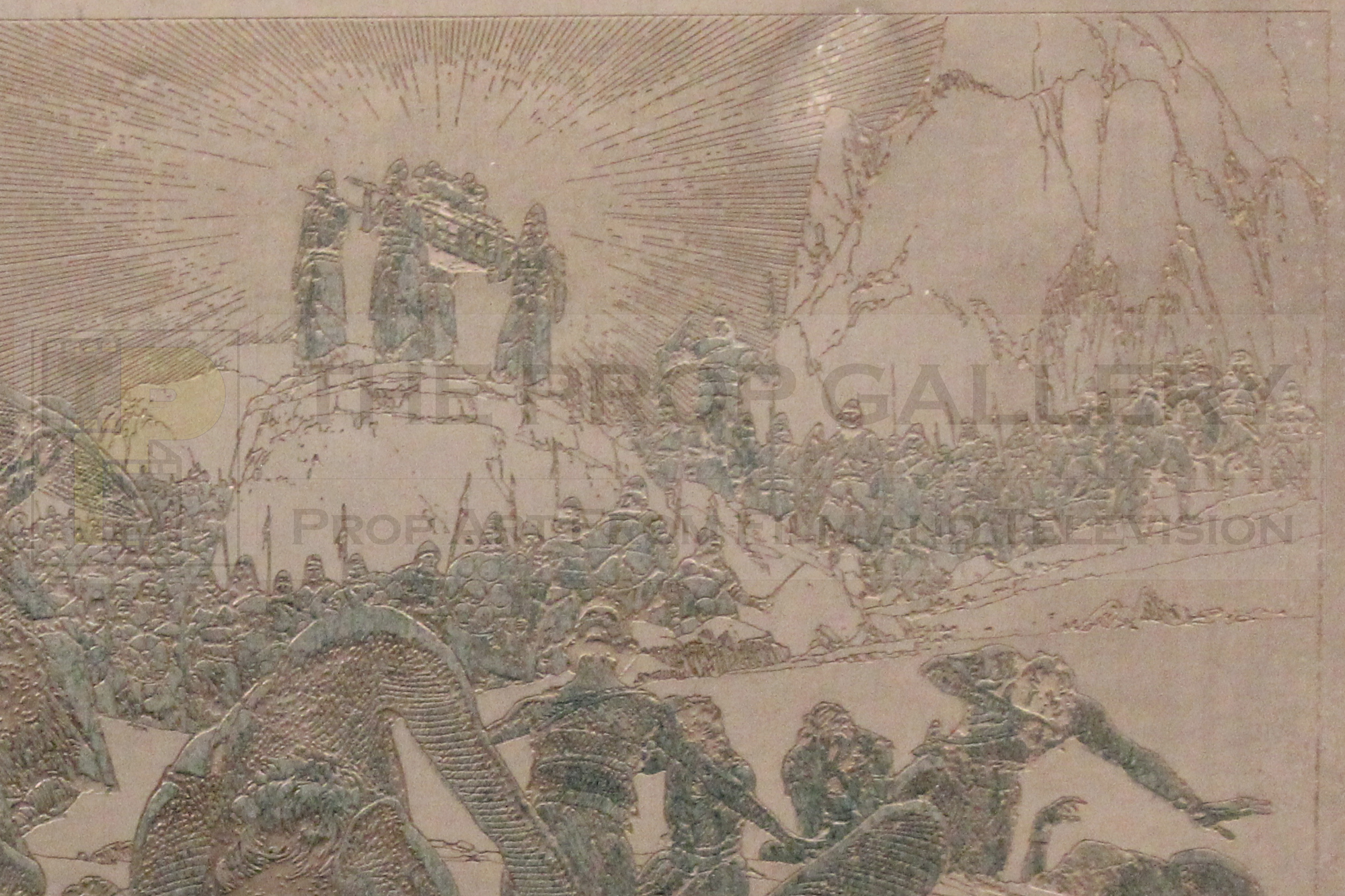 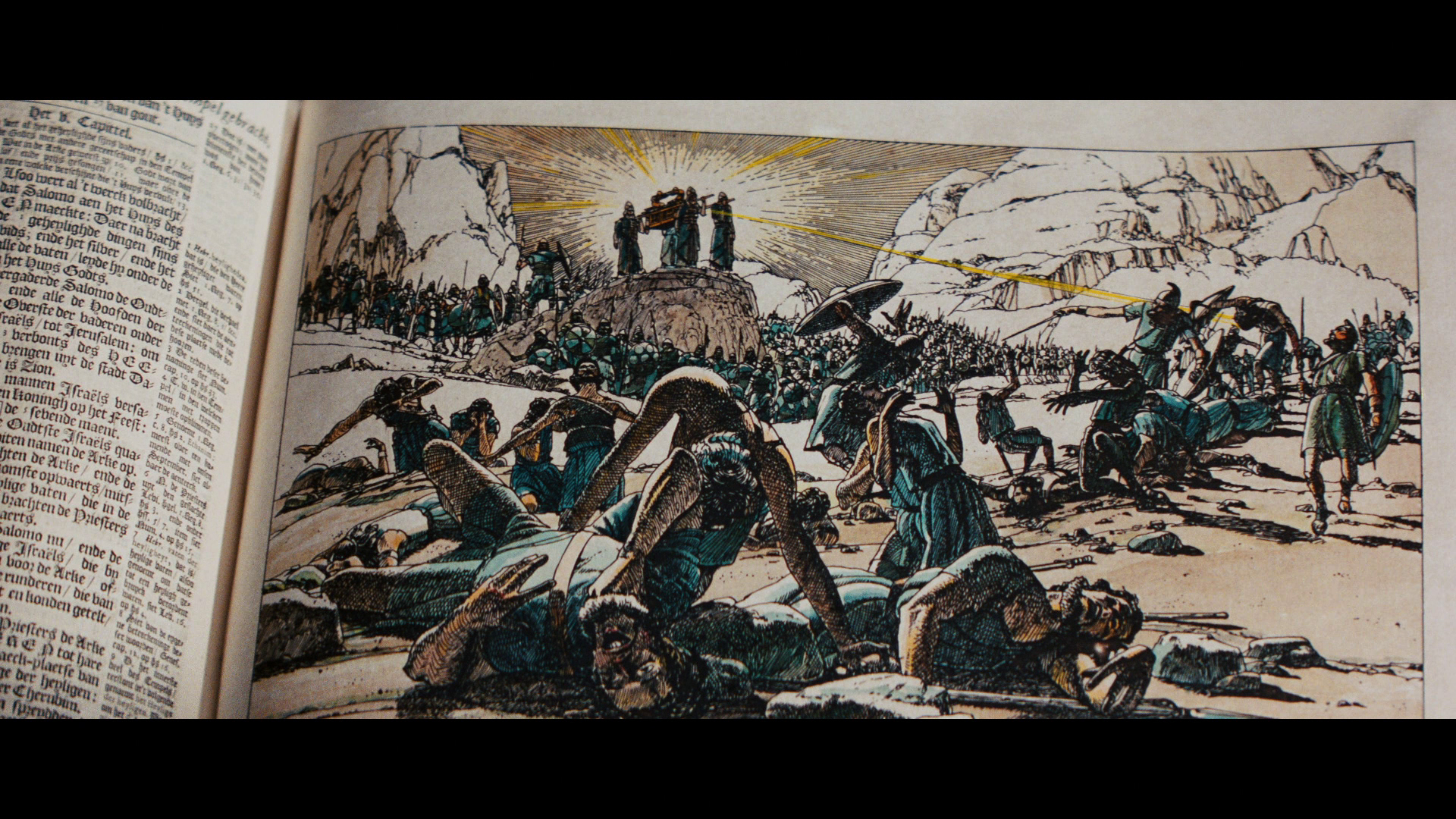 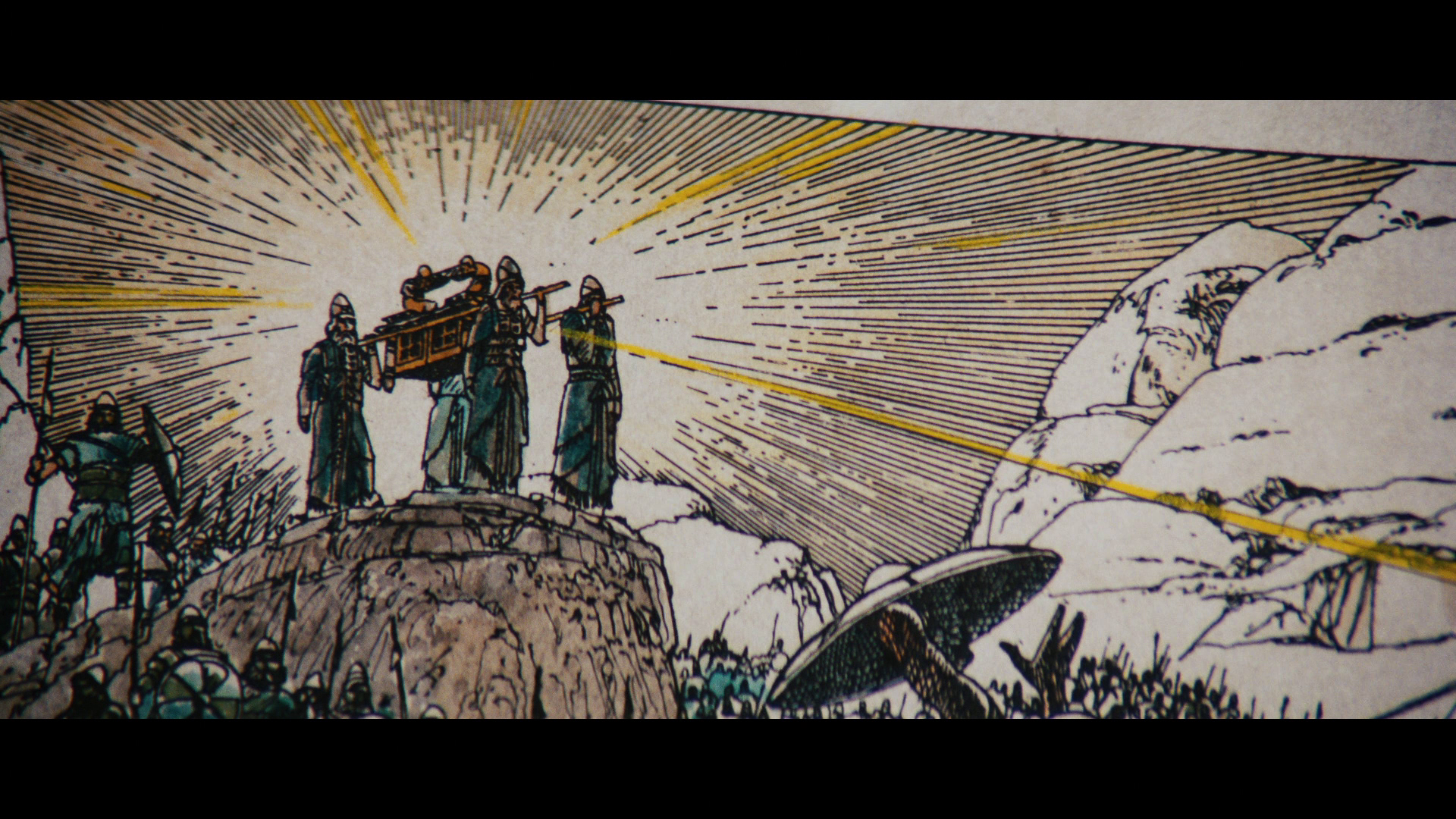