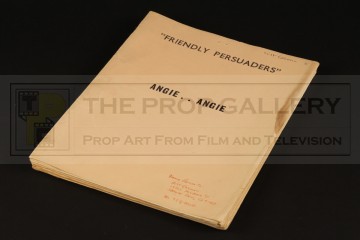 An original script used in the production of The Persuaders!, the 1971 television series starring Roger Moore and Tony Curtis.

This is an original production used script for the episode Angie, Angie... broadcast in November 1971, the script comprises of 70 pages bound between front and rear covers of pink card with the front featuring the original name of the series "FRIENDLY PERSUADERS" and the title of the episode below. The front cover is hand inscribed with the name and address of 'MILT GELMAN' for Milton S. Gelman who wrote the episode and utilised this very script during the production. The interior of the front cover features an original production memo from Gelman regarding script changes in line with network programming policy with a cast and set list and some minor hand inscribed annotations relating to dialogue changes some corresponding with the memo.

A rare and exceptionally fine example of original production material from this well regarded series.