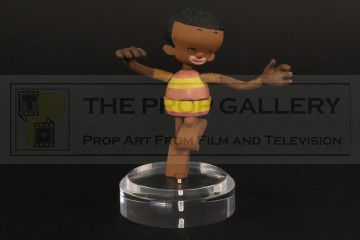 An original puppet used in the production of the famous Jasper Puppetoons created by George Pal throughout the 1940's using stop motion animation.

This is an original puppet used in various Jasper Puppetoons which utilised the replacement method of animation to bring the characters to life with different heads and bodies being used for each of the various expressions and movements required. These controversial and celebrated productions proved pioneering, as did the notable individuals who helped produce them including the great Willis O'Brien and Ray Harryhausen who animated three Jasper shorts in his time at Puppetoon Studios before going on to become an effects legend in his own right.

The Jasper puppet is hand carved in wood with a hole to the underside of the foot allowing it to be mounted on the stage for filming, the body splitting at the waist allowing the animators to mix and match the various walking movements with various upper body pieces, the detachable head features two holes which would house removable eye appliances and a static painted mouth, in this case a smiling expression which is seen prominently. The puppet is hand painted with Jasper's signature outfit and finely detailed with the hair being of a textured and stippled finish.

The puppet stands approximately 4.25" tall and remains in remarkable vintage condition although it would be wise not to attempt to pose the arms, minimal paint wear is present but he remains very fine overall.

An extraordinarily rare and displayable artefact from these celebrated productions which saw George Pal recognised with an Honorary Award from the Academy of Motion Picture Arts and Sciences "for the development of novel methods and techniques in the production of short subjects known as Puppetoons".