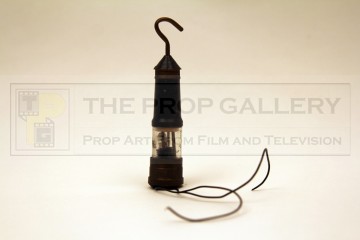 An original lantern used in the production of the 1968 Gerry Anderson television series Joe 90.

This puppet scale miners lantern was used in the story Relative Danger where Joe has to take on the brain patterns of an underground explorer in order to free three miners who are trapped underground. The lantern is intricately detailed and is rigged to light with wires coming from the base and up through the brass handle, connecting to a battery revealed the lamp to still be in working order some 45 years later!

This rare and fantastically detailed miniature from the golden age of Supermarionation measures 3.5" tall and is in original screen used condition with some wear.