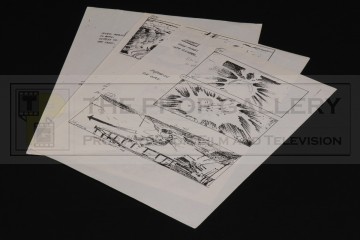 These storyboards are production issued copies of the original artwork created by Industrial Light & Magic illustrator George Jenson. The sequence consists of three pages which depict the scenes as Luke Skywalker (Mark Hamill) and Princess Leia (Carrie Fisher) swing to safety and the Sail Barge explodes. The various illustrations feature a number of notes relating to the scenes and camera movement.