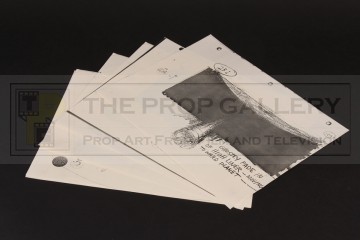 A collection of original storyboards used during the production of Dune, the 1984 David Lynch adaptation based on the novel by Frank Herbert.

These storyboards were created at Apogee Inc who were originally contracted to provide the visual effects for the picture, headed up by effects pioneer John Dykstra who had previously won an Academy Award for his work on Star Wars before forming his own visual effects company in the late 1970's. Ultimately Apogee did not provide the effects and pulled out of the project altogether.

This lot consists of a sequence of six storyboards feature the Heighliner and consecutive shot numbers from scene 60. The storyboards measure 11" x 8.5" and remain in excellent production used condition, extremely fine.

A rare and interesting collection of production material from the early days of this box office flop which later achieved cult status with science fiction fans.