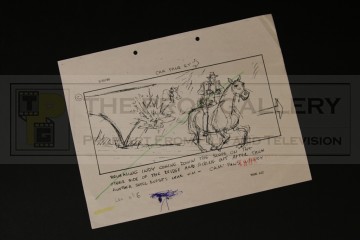 An original production used storyboard used in the production of Indiana Jones and the Last Crusade, the third instalment in the popular Indy franchise.

The storyboard is from the memorable tank chase scene and was used by assistant director Carlos Gil on location filming, the board is dated 3/30/88 and is marked with the production stamp 'TANK 002' and loc: no-6 handwritten in pencil. The board has been crossed in what appears to be green highlighter, common on production after shots have been completed.