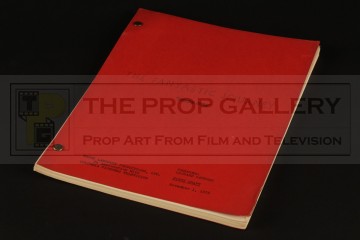 An original script used in the production of The Fantastic Journey, the American science fiction television series aired in 1977.

From the episode Turnabout broadcast in April 1977 this original production used first draft script is dated November 1, 1976 and comprises of 69 pages bound between front and rear covers of red card with the front featuring the series logo and the working title of the episode "UNTAMED SHREW'.