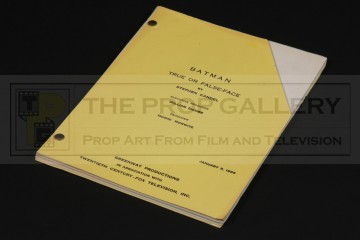 From the Season One episode True or False-Face broadcast in March 1966 this original production used final script is dated January 5, 1966 and comprises of 62 pages bound between front and rear covers of yellow card with the front featuring the title of the series and various production details. The script features a number of blue revision pages throughout which are dated January 11, 1966, a single pink revision dated January 13, 1966 and six yellow pages of additional material placed to the rear, these dated February 16, 1966.

The script remains in excellent production used condition exhibiting some minor edge wear from handling and minimal toning with the corner of the cover clipped, otherwise fine.