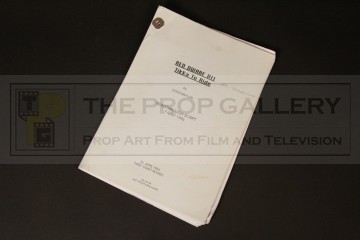 From Tikka to Ride, the memorable episode in which the crew use the time drive to go curry hunting and end up inadvertently preventing the assassination of American president John F. Kennedy. This complete readthrough script is dated 26th April 1996 and consists of front cover followed by 57 pages. The front cover carries a note regarding a smoke effect with the relevant scene inside circled where the intercom Lister is speaking into begins to smoke, a job which would have fallen to the effects department.

In excellent production used condition throughout with some light staining in places this script originates from the collection of visual effects designer Peter Wragg.