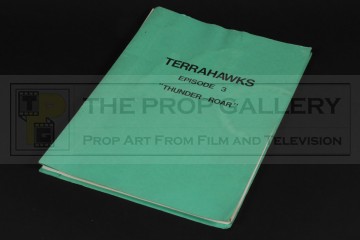 This script was issued to and used by assistant director Derek Whitehurst during the production of the episode Thunder-Roar. The script is dated November 1982 and comprises of 33 pages in addition to a set and cast page with a cover page hand inscribed with Whitehust's name, this bound between front and rear covers of green card. The heavily used script features extensive use of highlighter pen and annotations in Whitehurst's hand throughout with two examples of revision pages being cut and tipped in to place.

The script remains in excellent production used condition exhibiting some minor cover wear from use and handling.