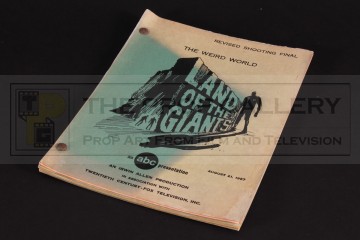 Land of the Giants

An original script used in the production of Land of the Giants, the classic 1960s American television series created by Irwin Allen.

For the season 1 episode The Weird World this original revised final draft shooting script is dated August 21, 1967 and comprises of 71 pages bound between front and rear covers of green card with the front featuring the famous series logo. The script is printed on light blue paper and features set and cast lists to the front with a large quantity of multi-coloured revisions throughout which are dated September and October 1967.

The script remains in good production used and vintage condition exhibiting minor toning to the interior pages and some significant colour fade to the covers.