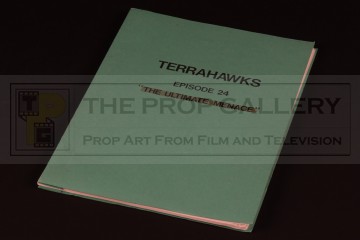 This script was issued to and used by assistant director Derek Whitehurst during the production of the episode The Ultimate Menace. The script comprises of 34 pages in addition to a set and cast page with a cover page hand inscribed with Whitehust's name, this bound between front and rear covers of green card. The script features extensive use of highlighter pen and annotations in Whitehurst's hand throughout, it is accompanied by his working shooting schedules, a page detailing an additional shot, set list and a blank unused shopping list, this paperwork again featuring highlighter pen and a number of annotations in both pen and pencil.