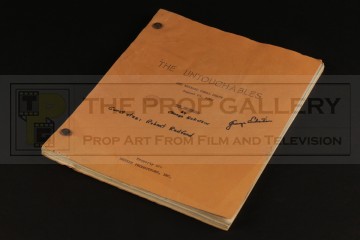 An original script used in the production of The Untouchables, the American crime drama series production by Desilu Productions.

From the Season Four episode The Snowball broadcast in January 1963 this original production used script comprises of 60 pages bound between front and rear covers of brown card with the front featuring the name of the series and the date August 23, 1962. The script features a quantity of blue revision pages throughout which carry the date 8/27/62 and the front cover has been hand inscribed by writer George Eckstein who utilised this script during the production, additionally it is signed by him in black marker.

A fine example of original production material from this highly regarded series.