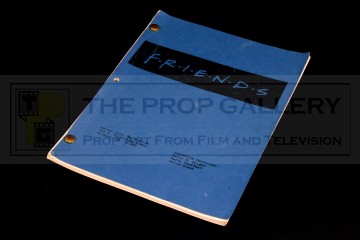 Production used script - The One Where They All Turn Thirty

From the season seven episode The One Where They All Turn Thirty broadcast in February 2001 this original production used table draft script is dated November 3, 2000 comprises of 51 pages in addition to a character and set list and three page running order, these bound between front and rear covers of blue card with the front featuring the famous series logo and producer credits to Bright/Kauffman/Crane. The interior cover page features the production code #226411 and is noted as being episode 11 of the season, this production order was changed and it was ultimately broadcast as episode 14.

The script remains in very good condition having clearly seen use during the production exhibiting some wear to the covers with an illegible note to the interior cover page which also features some minor stain marks, minor general wear from use and handling present throughout.

A fine example of original production material from this iconic series which ranks among the most popular in television history.