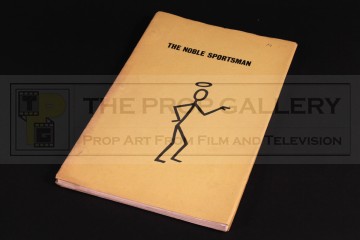 An original script used in the production of The Saint, the 1960s spy television series starring Roger Moore in the title role.

This is an original production used script for the Series 2 episode The Noble Sportsman broadcast in January 1964 which comprises of 65 pages bound between front and rear covers of yellow card. The front cover of the script features the title of the episode with the famous series logo of a stick man with halo below, additional pages to the front include a cast list and set list which also details locations and use of process plates and stock shots.

The script remains in very good production used and vintage condition exhibiting only minor toning with some edge wear to the front and rear covers.