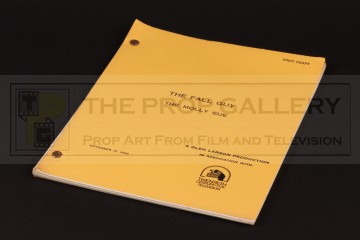 An original script used in the production of The Fall Guy, the 1980s television series starring Lee Majors.

From the season two episode The Molly Sue broadcast in March 1983 this original production used first draft script is dated November 10, 1982 and comprises of 43 light green pages bound between front and rear covers of yellow card. The front cover of the script features the name of the series and the Twentieth Century Fox logo, to the rear of the script is a page stating 'BALANCE OF SCRIPT TO FOLLOW' indicating that the ending had not been written at the time this first draft was issued.

An fine example of original production material from this classic television series.