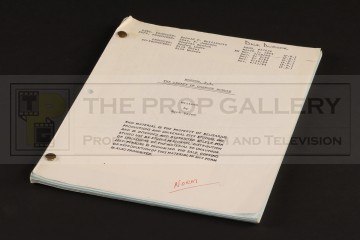 From the 1984 Season Five episode The Legacy of Garwood Huddle this is the original production used script issued to Dick Durock who portrayed Norm. The script is dated 4/4/84 and comprises of 60 largely blue pages in addition a cast and set list with a cover featuring the name of the episode with credits for senior production members, this hand inscribed 'DICK DUROCK' and 'NORM'. The script features various revision pages on yellow, green and white which are dated 4/5/84, 4/10/84 and 4/11/84 respectively. The script is accompanied by a production used call sheet containing various information regarding the shoot.

The script remains in excellent production used condition with some minor edge and corner wear due to handling, overall very fine.

A fine example of original production material from this classic American series.