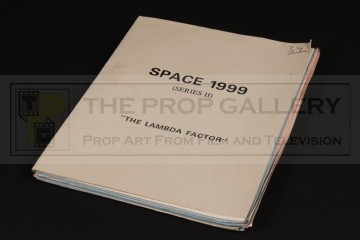 An original script used in the production of the cult science fiction series Space: 1999 produced by Gerry and Sylvia Anderson.

For the Year Two episode The Lambda Factor this final shooting script is dated 6th August 1976 and consists of 69 pages in addition to cast and set lists and is bound within a wraparound cover of grey card which bears the title of the series and name of the episode to the front. The script features various revision sheets throughout on pink and blue paper which are dated 02/09/76, 27/09/76, 28/09/76 and 29/09/76 respectively. Utilised at Bray Studios during the production this script was obtained directly from Academy Award winning special effects artist Brian Johnson who was responsible for much of the groundbreaking miniature effects work on the series.