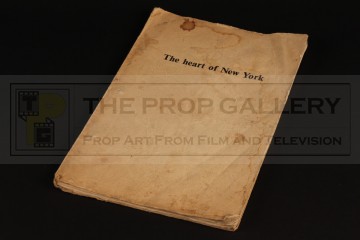 Captain Scarlet and the Mysterons

An original script used in the production of Captain Scarlet and the Mysterons, the 1967 Supermarionation television series created by Gerry and Sylvia Anderson.

This original production used script for the episode The Heart of New York broadcast in December 1967 comprises of 41 pages bound between front and rear covers of yellow card with the front featuring the episode title in bold print. The script features an interior cover page in addition to character and set lists with various hand inscribed writing throughout including 'PLAY AT OWN RISK' to the interior of the cover.

The foolscap sized script remains in fair condition having clearly seen extensive use during the production exhibiting cover wear and staining with some paper loss to the front and rear pages.