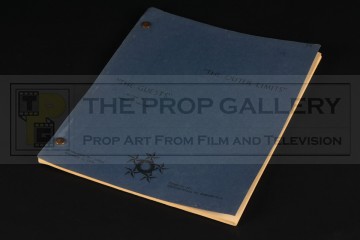 An original script used in the production of The Outer Limits, the classic 1960s science fiction created by Leslie Stevens.

From the Season 1 episode The Guests broadcast in March 1964 this original production used script is an early uncompleted version dated February 5, 1964 which comprises of 37 pages bound between front and rear covers of blue card, to the rear of the script is a yellow page stating 'BALANCE OF SCRIPT TO FOLLOW' meaning this script was issued before the episode had been scripted in its entirety.