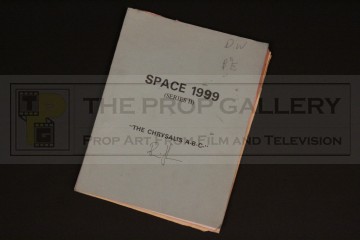 An original script used in the production of the Gerry Anderson television series Space: 1999 for the series 2 episode The AB Chrysalis.

Written by Tony Barwick, this is a final shooting script dated 18th May 1976. The script consists of 69 A4 type written pages in addition to the cast and set lists and is bound within a wraparound cover of turquoise card which bears the original title of the episode The Chrysalis A-B-C. It contains numerous pink and yellow revision sheets dated 11th June 1976 and 30th June 1976 respectively. This script is inscribed to the cover D.W & B.E in pencil, likely for SFX technician David Watkins and possibly modeller Brian Eke, it was utilised at the Bray Studios SFX department during production. In addition it has been signed by and was obtained directly from Academy Award winning special effects expert Brian Johnson who was responsible for much of the groundbreaking model effects work on the series.

The script remains in excellent condition with some light wear from production use, particularly to the edge of the revisions.