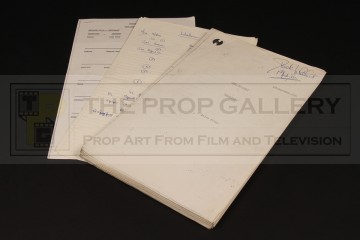 From the Series One episode Stoppo Driver broadcast in March 1975 this original production used script comprises of 87 pages with further pages listing the cast and various locations. The cover of the script features the early working title 'Wheelman' and is dated 9th September 1974 with the hand inscribed name to the top corner being that of 1st assistant director Derek Whitehurst who used this script during the production. The script features various annotations throughout and was clearly heavily used by Whitehurst during the production, it is accompanied by seven sheets of notes which are hand inscribed in Whitehurst's hand and a two page list featuring addresses and contact details for the various cast members.

A very rare example of original production material from this classic series.