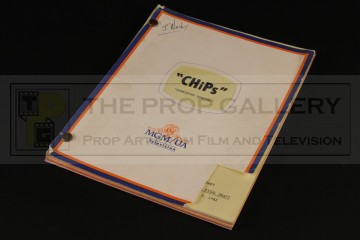 An original script used in the production of the American television drama series CHiPS.

For the season six episode Something Special this revised final draft script comprises of 53 multi-coloured pages featuring various revision dates in addition to four further pages detailing the cast and set requirements with a cover page featuring the series logo and the date October 6, 1982. The script is bound by split pins between front and rear boards of white card with the front featuring a window cut out and the MGM/UA Television logo with the name 'John Nasby' hand inscribed in blue pen, minor annotations are present throughout. This is accompanied by a ten page shooting schedule which also features hand inscribed annotations throughout.

The script remains in very god vintage condition with some cover wear to include paper loss to the corner, shooting schedule very good exhibiting some edge wear and toning.