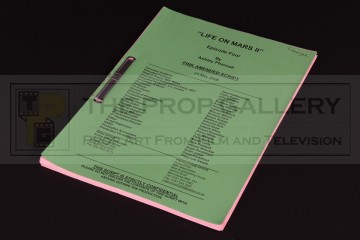 An original script used in the production of Life on Mars, the hit television drama series starring John Simm and Philip Glenister.

This original production used script for episode four of series two is dated 23 May, 2006 and comprises of 105 double sided pink pages bound with a green cover which features the title of the series and a concise list of the production crew. The script features numerous dialogue differences from the final cut of the episode with the most significant change being that when Sam Tyler (John Simm) and Annie Cartwright (Liz White) attend the wife swapping party they were to use the alias Wayne and Colleen Rooney rather than Tony and Cherie Blair. The front cover of the script is hand inscribed to the top right corner 'GEORGIE' for location assistant Georgie Turnbull who was issued it during the the production.

The script remains in excellent production used condition with only minor edge and cover wear from use and handling, overall very fine.

A fine example of original production material from this well received and multi award winning series.