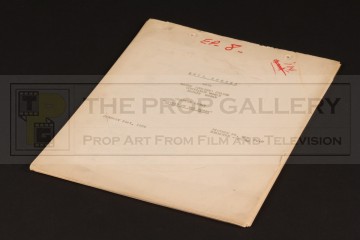 An original script used in the production of Buck Rogers, the 1939 serial film starring Buster Crabbe.

This is an original continuity and dialogue script used during the production, likely by the editing, film repair and censorship departments. The script is dated January 31st, 1939 and comprises of 39 pages in addition to a cover page bearing the title of the serial 'BUCK ROGERS', 'CHAPTER EIGHT, REVOLT OF THE ZUGGS' and further hand inscribed 'EP-8' in red wax crayon. Split in to two parts over two reels the script features hand inscribed markings to the interior throughout reel two, again in red wax crayon.

An exceptionally rare example of original production material from the production of this classic serial film.