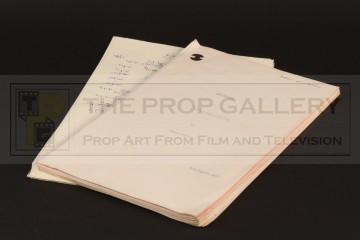 From the Series One episode Queen's Pawn broadcast in January 1975 this original production used script is dated 20th August 1974 and comprises of approximately 80 pages with various revisions on pink paper dated 28th August and some cut and taped over the original dialogue. The cover features the working title of the episode 'FOOL'S MATE' and the name of 1st assistant director Derek Whitehurst who used this script during the production and is extensively annotated in his hand with various notes throughout. It is accompanied by various other production material to include several pages of Whitehurst's hand written notes and a cast list.