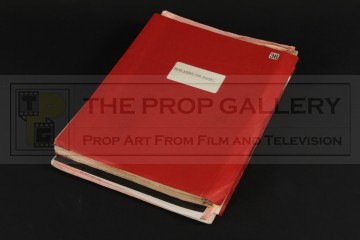 Man About the House

An original script used in the production of Man About the House, the 1974 British comedy based on the sitcom of the same name.

This original production used script comprises of 137 pages bound between front and rear covers of red card with the front featuring a window cut out revealing the title of the movie to the interior cover page which is signed by assistant director Derek Whitehurst who utilised this script during the production. The working script features various coloured revision pages dated early 1974, numerous hand inscribed annotations throughout along with tipped location photographs and is accompanied by a wealth of production material to include a shooting schedule, unit list, cast list, 21 artist contracts for the various cast members, vintage still and memo.

The script remains in very good vintage condition exhibiting some wear from use and age, accompanying paperwork good with some exhibiting wear and toning, inscribed with title to the spine, overall very good.

A very rare example of original production material from this well received comedy.