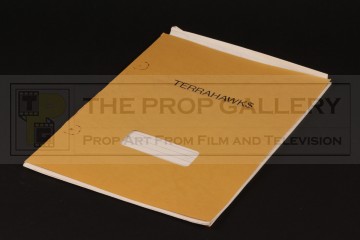 This script was issued to and used by assistant director Derek Whitehurst during the production of the episode Ma's Monsters, a clip show using footage from the previous episodes Thunder Path, The Sporilla, Operation S.A.S and Happy Madeday. The script comprises of 8 pages detailing the filming of the new sequences and the integration of those previously filmed in addition to a set page and cover which is hand inscribed with Whitehurst's name, this bound between front and rear covers of yellow card. The script is accompanied by the original working shooting schedule and set list which are pencil inscribed in Whitehurst's hand with further production made and used copies of these also present, the set list features highlighter pen which corresponds with the highlights throughout the main script.