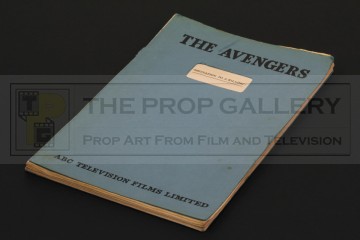 An original script used in the production of The Avengers, the cult 1960s television series starring Patrick Macnee and Diana Rigg.

This is an original script used in the production of the unaired episode Invitation to a Killing which was originally to serve as the introduction for new sidekick Tara King portrayed by Linda Thorston, this John Bryce produced episode was subsequently reworked with some sequences cut and others added to become Have Guns - Will Haggle.

The script is dated October 1967 and comprises of 69 pages bound between front and rear covers of blue card with the front featuring the name of the series 'THE AVENGERS' to to top in bold print and 'ABC TELEVISION FILMS LIMITED' credit to the bottom. A window cut out to the front outer cover of the script reveals the title of the episode 'INVITATION TO A KILLING' to the interior cover page which also features writing credit to Donald James and the address for Elstree Studios. A further page before the script begins is titled 'IMPORTANT' and lists 12 specific stipulations which were to be strictly adhered to, this likely for the benefit of the American market ensuring that the episode was suitable to broadcast. Two of the interior pages feature crude maps which were hand drawn by a member of the production, these hand inscribed in pencil to the verso of pages 66 and 67.

The script measures 13" x 8" and remains in excellent production used condition with wear to the font and rear covers and minor toning to the interior pages, overall very fine for a script of its fifty year vintage. This represents an exceptionally fine example of the original script for this noted unaired episode the rarity of which cannot be overstated.

An exquisite example of original production material from this classic television series.