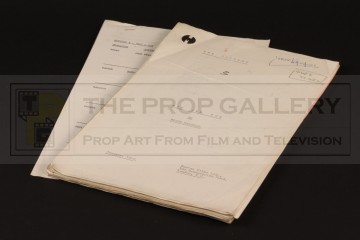 From the Series Two episode Hit and Run broadcast in September 1975 this original production used script is dated January 1975 and comprises of 49 pages with various revisions on pink paper in addition to a cast list to the front and a two page character list to the rear. The cover features the name of 1st assistant director Derek Whitehurst who used this script during the production and is extensively annotated in his hand with various notes inscribed throughout. The script also features a number of original location reference photographs stuck to the verso of various pages throughout the script.

The script measures 13" x 8" and remains in excellent vintage condition with some edge wear from use and handling, the tape used to adhere the photographs to the verso of various pages being visible to the recto owing to age, overall very fine.

An exceptional example of an original script which clearly saw heavy use during the production of this classic series.