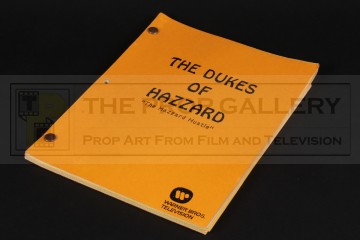 Dukes of Hazzard (The)

An original script used in the production of The Dukes of Hazzard, the classic American television series first broadcast in 1979.

This original production used revised final draft script for the Season 5 episode Hazzard Hustle is dated September 21, 1982 comprises of 66 multi-coloured pages to include various revisions dated throughout September, in addition to this the script features an interior cover page with further pages listing the cast, sets and vehicles required for filming, these bound between front and rear covers of orange card with the front featuring the series logo and that of Warner Television. The script features a large quantity of highlighted sections and hand inscribed annotations throughout which all relate to the filming of vehicles with corners turned following use.

A rare example of original production material from this classic television series.