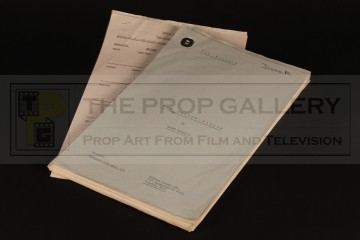 From the Series Two episode Golden Fleece broadcast in October 1975 this original production used script is dated Wednesday 16th August 1975 and comprises of 75 pages. The cover of the script features the title 'THE GOLDEN FLEECE' with the name 'DEREK' hand inscribed to the top right corner for assistant director Derek Whitehurst who used this script during the production, to the interior the script contains numerous annotations in his hand with a quantity of location photographs to the verso of various pages. This is accompanied by further production material to include a three page cast list, two call sheets and maps for Cowley's bedroom and Warburton's office, the latter inscribed with Whitehurst's initials.

The script and accompanying paperwork measure 13" x 8" and remain in excellent vintage condition with only minor edge wear and toning, some photographs taped to the interior have loosed due to age, overall very fine.