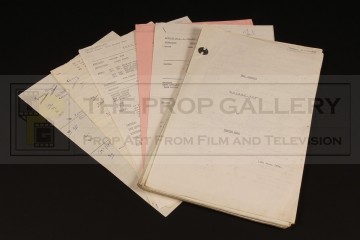 From the Series One episode Golden Boy broadcast in February 1975 this original production used script is dated 13th June 1974 and comprises of approximately 70 pages with various revisions on pink and blue paper dated 19th and 20th June respectively. The cover features the name of 1st assistant director Derek Whitehurst who used this script during the production and is extensively annotated in his hand with various hand inscribed notes and hand drawn maps throughout. It is accompanied by a wealth of production material to include four pages of Whitehurst's hand written notes, a two page cast list, synopsis, call sheet, two internal memos and a four page document with details of the timing for the bank raid sequence.