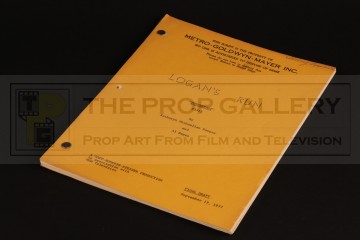 An original script used in the production of Logan's Run, the 1977 television series based on the 1976 movie of the same name.

This original production used final draft script for the episode Futurepast is dated September 19, 1977 and comprises of 59 pages bound between front and rear covers of yellow card with the front featuring the name of the series and episode title, to the front of the main script are pages detailing the cast and sets required. The top right corner of the cover features the name of cinematographer Irving Lippmann who was the director of photography on all fourteen episodes of the series and utilised this script during the production.

A fine example of original production material from this memorable series.