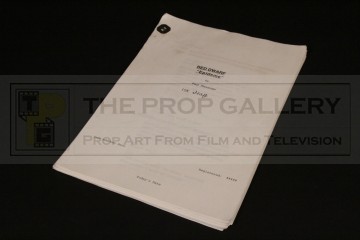 This is an original script used in the production of the series VII episode Epideme in which Lister contracts a deadly virus. Comprising of 57 pages on white paper with additional cover page titled 'RED DWARF, Epideme' and noted as being a 1st draft this particular script was utilised during the production by the BBC Visual Effects Department and as such any miniature effects shots or special effects requirements are highlighted in orange.