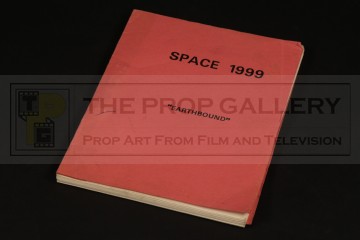 From the Year One episode Earthbound this undated final shooting script comprises of 73 bound between front and rear covers of pink card with the front featuring the series name and episode title in bold type.

The script remains in excellent production used condition exhibiting some minor wear from use and handling.

A rare example of original production material from the early days of this acclaimed television series.