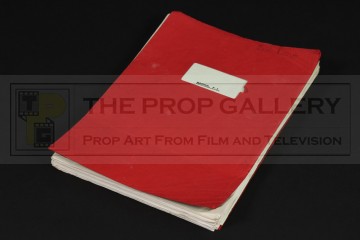 From the 1985 two part Season Six opener Déjà Vu this complete original production used script is last dated April 10th, 1985 and comprises of 245 pages bound between front and rear covers of red card with a window cut out to the front revealing the title of the series to the interior cover page. The script was issued to and used during the production by credited hair stylist Sue Love and features her name hand inscribed to the front cover with a number of green revision pages throughout and approximately a dozen Polaroid photographs used for continuity which are applied to the verso of various pages.

The script remains in excellent production used condition with general edge wear from use and handling, a few of the Polaroid photographs to the interior having loosed due to ageing tape, otherwise fine

A very fine example of original production material from this classic American series.