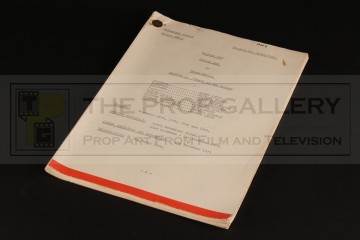 From the 1974 serial Death to the Daleks starring Jon Pertwee as The Doctor this is an original rehearsal script for episode 2. The script comprises of 47 pages in addition to a cast and set list with the front cover featuring the title of the serial 'DEATH OF THE DALEKS', recording dates and a list of various production staff. The front cover is hand inscribed 'P.M.G' for veteran Dalek operator Peter Murphy Grumber who utilised this script during the production, the interior featuring numerous minor annotations in his hand relating to the Dalek speaking parts.

A rare example of original production material from the Jon Pertwee era of this classic science fiction series.