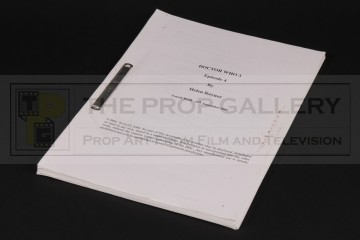 From the 2007 episode Daleks in Manhattan starring David Tennant as The Doctor this original production used fourth draft script is dated 25th September 2006 and comprises of 56 pages in addition to the front cover which features the title of the series with writing credit to Helen Raynor. To the interior every page of the script is watermarked 'DW3 Ep4d4, MARNIE ORMISTON' who served as assistant costume designer on the series.

The script remains in excellent production used condition exhibiting some minor rust transfer to the cover and edge wear from use and handling, generally fine.