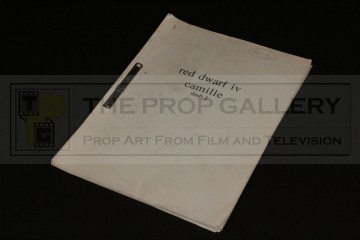 From Camille, the opening episode of Series IV in which Kryten meets his love interest, this production used script comprises of 47 pages printed on light blue paper with additional cover page which reads 'red dwarf iv, camille, draft 2'. The cover of the script is hand inscribed in pencil 'Ep 4' however this was moved forward to the first episode of the series to enable it to be broadcast on Valentines Day, 1991. This early draft features some minor dialogue differences to the final cut, most significantly in the opening scene where Lister attempts to teach Kryten how to lie and Cat joins them, in this draft Cat is completely absent during this sequence.

A fine example of an early original script from this cult BBC science fiction series.