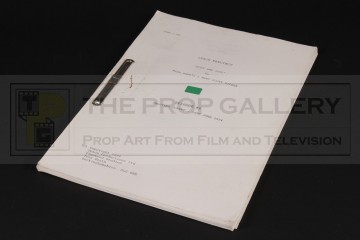 An original script used in the production of Space Precinct, the 1994 science fiction television series created by Gerry Anderson.

This original production used script for the episode Body and Soul is dated 24th June 1994 and comprises of 58 pages with additional cast and set lists and a pronunciation guide. The cover features the title of the series and episode and is noted as being episode 6, this was filmed as episode 6 but was broadcast as episode 3, a green sticker is also present.

A fine example of original production material from this well regarded Anderson series.