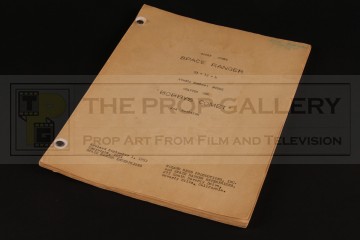 This original production used revised script for chapter one of Bobby's Comet broadcast in April 1954 is dated September 1, 1953 and comprises of 44 pages bound between front and rear covers of brown card. The front cover features the title of the series with the studio number and is marked as being a second revision, the top right corner is hand inscribed with the name of production designer and technical director Dick Morgan who utilised this script during the production, the script features numerous hand inscribed annotations throughout with further writing to the rear cover.

The script remains in very good vintage condition its age considered exhibiting toning with old water damage to the front cover which does not detract from what is an extraordinarily rare example of original production material from this 1950s science fiction production.