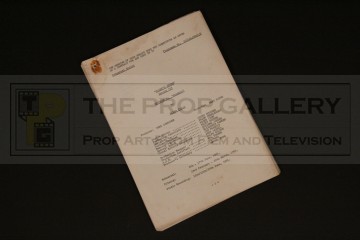 An original script used in the production of the British science fiction series Blake's 7.

For the series 4 episode Animals the script consists of 119 typewritten pages plus cover and cast sheet.

The script exhibits significant water damage, mostly to the latter pages but is still in readable condition with staples having been added in order to compensate for the missing pin which has left some oxidisation marks.